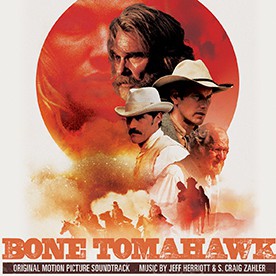 The Bone Tomahawk soundtrack was just released on vinyl through Invada Records. It’s a limited edition of 250 on blood-splattered vinyl, and it comes with one of five different character cards.

“Bone Tomahawk is a western with a horror twist, described by Variety as ‘a gleefully grisly genre gazpacho that matches a rousing sense of Old West derring-do to a comic sensibility as dark as chewing tobacco’ with Kurt Russell starring as sheriff Franklin Hunt, leader of an unlikely team of gunslingers tracking down a horde of cannibal cave-dwellers.” (Fact Mag)